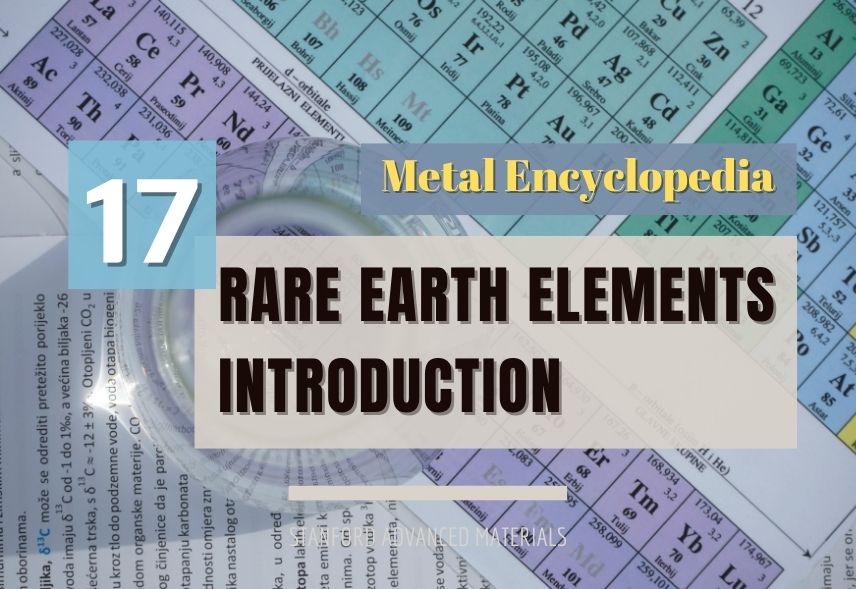 Rare earth materials are important for many aspects, including electronics, the internet, communication, health care, and so on. Today, I would like to introduce these seventeen elements in alphabetical order for you. 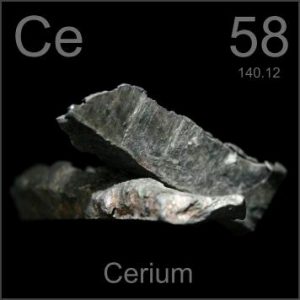 Cerium is the most abundant rare earth element. First discovered in 1803 by Jöns Jakob Berzelius and Wilhelm Hisinger, cerium is named after the Roman goddess of agriculture, Ceres. It is a silvery gray active metal, whose powder is easily oxidized in the air and soluble in acid. Cerium is considered the most reactive element of all the rare earth metals except for europium. Cerium has been widely used in the automotive industry as a catalyst to reduce emissions, and in the glass industry as a glass polishing material. Cerium sputtering target and cerium evaporation materials are important materials in optical coating. 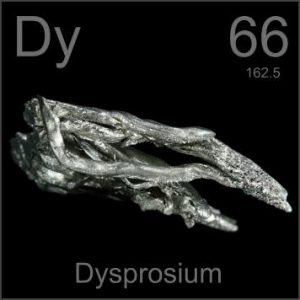 Dysprosium is isolated from its oxide by French chemist Paul Émile Lecoq de Boisbaudran after more than 30 attempts. Thus he named this element “Dysprosium” from the Greek dysprositos (δυσπρόσιτος), meaning “hard to get”. It is a soft, silver metal with one of the highest magnetic strengths. Due to its special property, dysprosium is often added to permanent rare earth magnets to improve their efficiency at higher temperatures. It is also used in lasers and commercial lighting to create electronics that require certain magnetic properties. Dysprosium sputtering targets and Dysprosium evaporation materials are important thin film coating materials. 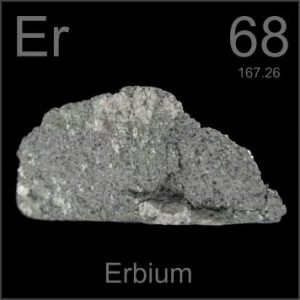 Erbium is a silvery-white solid metal that was discovered by Carl Gustaf Mosander in 1843. It is a significant rare earth element in the nuclear area. You can find Erbium in neutron-absorbing control rods, fiber optic communications systems, and lasers. Erbium also has an aesthetic application, for instance, it can be used as an additive in glass to create a pink color. Erbium sputtering targets and Erbium evaporation materials are used in deposition processes including semiconductor deposition, chemical vapor deposition (CVD), and physical vapor deposition (PVD). 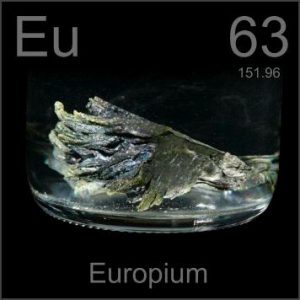 Europium has not been isolated until 1901, because it is difficult to separate this element from the minerals containing other rare earth elements. Its name came from “the continent of Europe”. It is a moderately hard, silvery metal that readily oxidizes in air and water. Europium can be used as a luminous source to create visible light in compact fluorescent bulbs, which helped to popularize the early generations of color television sets. It can also be used on dollar notes that prevent counterfeiting. We use Europium sputtering targets and Europium evaporation materials to deposit Eu thin films. 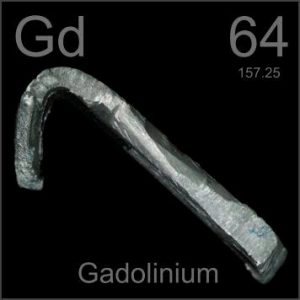 Gadolinium has specific properties that make it particularly suitable for some important applications in the medical area. For example, it can shield nuclear reactors and neutron radiography. It can also target tumors in neuron treatment and can improve magnetic resonance imaging (MRI), which helps both the tumor treatment and the finding of tumor growth. X-ray and bone density tests also utilize gadolinium. In conclusion, gadolinium is a noteworthy rare earth element of present health care solutions. Gadolinium sputtering target and Gadolinium evaporation materials are important materials in the electronic coating. 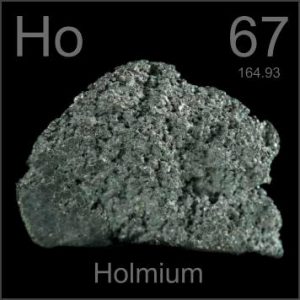 Holmium was discovered in 1878 by Swedish chemist Per Theodor Cleve and its name came from the city of Stockholm. This element is soft, malleable, and relatively volatile. Similar to dysprosium, holmium also has incredible magnetic properties. Holmium alloy can be used to make magnetic flux concentrators, which can create the strongest magnetic fields. Apart from it, Holmium thin film, made by Holmium sputtering target and Holmium evaporation materials, can also provide coloring to the glass. 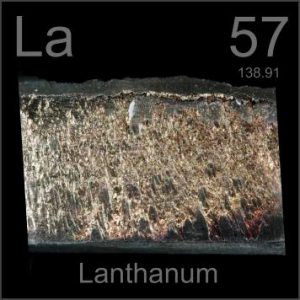 Lanthanum, a soft, malleable, silvery-white white metal, is one of the most reactive rare earth elements. It can be utilized to make special optical glasses and can also be utilized to make steel more malleable. In addition, lanthanum is helpful in wastewater treatment and oil refining. Scientists have given the name “super calcium” to Lanthanum due to its application to photoconversion film. Lanthanum sputtering targets and Lanthanum evaporation materials to deposit La thin film.

Lutetium was independently found by Georges Urbain, Baron Carl Auer von Welsbach, and Charles James as an impurity in the mineral ytterbia, which was previously thought to consist only of ytterbium. As the last of the lanthanide series, Lutetium has several interesting uses. For example, lutetium isotope can help reveal the age of ancient items, like antiques. Apart from it, lutetium isotope can also be used to target certain types of tumors. It can be used to make certain special alloys, such as lutetium aluminum alloy used for neutron activation analysis. Stable Lutetium nuclides can act as catalysts in petroleum cracking, alkylation, hydrogenation, and polymerization. Lutetium sputtering targets and Lutetium evaporation materials are important thin film coating materials.

Read more: What You Need to know about Lutetium Element 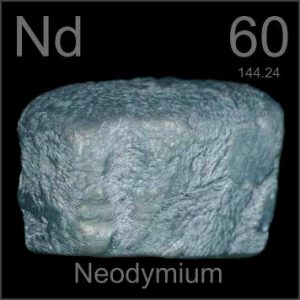 Neodymium is a metal with atomic number 60, belonging to the lanthanide series of metals on the periodic table. The name Neodymium is derived from the Greek word ‘neos didymos’, which means new twin. Neodymium is a soft, silvery metal that tarnishes in the air. It has a large specific heat capacity at low temperatures, so it is useful in the freezer. And it is used with praseodymium to create neodymium magnets–the strongest permanent magnets known. Certain transparent materials with a little neodymium particle can be utilized in lasers as gain media for infrared wavelengths. Neodymium sputtering targets and Neodymium evaporation materials are used in deposition processes including semiconductor deposition, chemical vapor deposition (CVD), and physical vapor deposition (PVD). 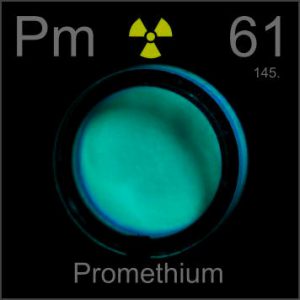 Promethium is an extremely rare metal, with only about 500–600 grams naturally occurring in the earth’s crust at any given time. However, it is not stable and therefore undergoes radioactive decay, producing different isotopes. Promethium is the only naturally radioactive rare earth element. Due to this property, all promethium in the earth’s crust has inevitably decayed into other elements. It accounted for that currently most Promethium has been artificially created Promethium. Most promethium is used for research purposes, and it is also used in watches and pacemakers. 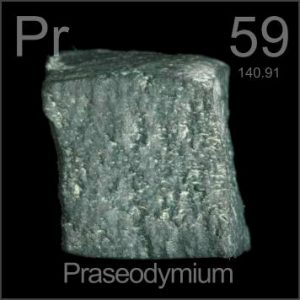 This soft, silvery, malleable, and ductile element is the third member of the lanthanide series. Its first application is to create a yellow-orange stain for ceramics. The combination of neodymium and praseodymium can be used to create high-power magnets notable for their strength and durability. Praseodymium can also be used for abrasive polishing. In addition, the use of Praseodymium in the field of fiber is also becoming more widespread. Praseodymium sputtering targets and Praseodymium evaporation materials are used in thin film deposition.

Read more: What You Need to Know About Rare Earth Praseodymium 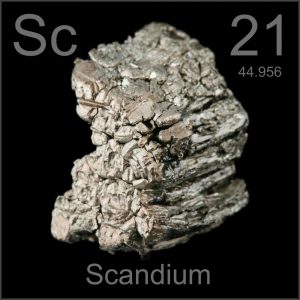 Scandium, a silvery-white metal, is one of the two non-lanthanide rare earth elements, together with yttrium. In the electronics industry, Scandium can be used in a variety of semiconductor devices; in the chemical industry, Scandium compounds are used as alcohol dehydrogenation and dehydrating agents to produce ethylene and high-efficiency catalysts for producing chlorine from waste hydrochloric acid; in the glass industry, it can be manufactured special glass containing Scandium. Scandium sputtering targets and Scandium evaporation materials are important coating materials in vacuum coating. 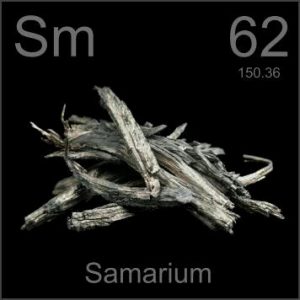 Samarium is a naturally occurring element, much like several other elements that appear in the earth’s crust. Studies show that it is about as common as boron, thulium, and gadolinium (both of which are lanthanides). Samarium is a moderately hard silvery metal that slowly oxidizes in the air. It is a raw material for samarium-cobalt-based permanent magnets, which are the first rare earth magnets for industrial applications. Samarium oxide is also used in ceramic capacitors and catalysts. In addition, Samarium also can be used as a structural material for atomic energy reactors, screen materials, and control materials to make nuclear fission generate huge energy for safe use. Samarium sputtering targets and Samarium evaporation materials are used for depositing Sm thin film. 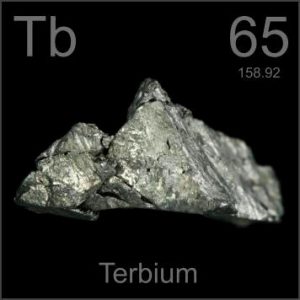 Terbium, the 65th element of the periodic table, is a rare earth metal belonging to the lanthanide series. Terbium was discovered as an impurity in yttrium oxide (Y2O3) by Swedish chemist Carl Gustaf Mosander in 1843. It is a silvery-white, rare earth metal that is malleable, ductile, and soft enough to be cut with a knife. In recent years, magneto-optical materials made of Terbium have been mass-produced. They can be used as computer storage components to improve 10 to 15 times capacity. Similarly, Terbium sputtering target and Terbium evaporation materials are also important coating materials in thin film coating. 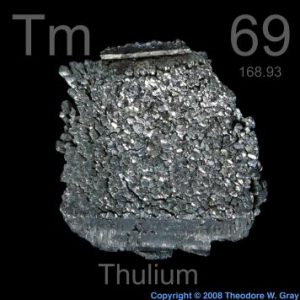 Thulium is a chemical element belonging to the lanthanide series of rare-earth metals. Thulium is primarily found in yttrium silicate, yttrium phosphate, and rare black gold ore. Unlike some other lanthanides, thulium is quite rare and expensive. Thulium is used as a source of the medical portable X-ray machine. Thulium can also be used for clinical diagnosis and treatment of tumors because it has a higher affinity for tumor tissues. What’s more, thulium can be used as the additive of a new type of lighting source – metal halide lamps. Thulium sputtering targets and Thulium evaporation materials are important thin film coating materials.

Read more: What You Should Know About Rare-Earth Element Thulium 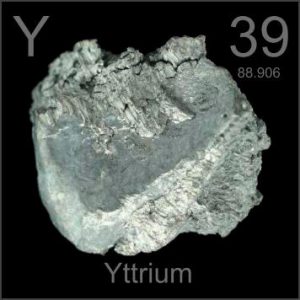 Yttrium is the other non-lanthanide rare earth element together with Scandium. And it is also the first discovered rare earth element. It is a gray-black metal that is malleable. Yttrium can be used in a wide range of industries: it can be used as a Yttrium phosphor to produce red color on TV screens; Yttrium is a high-temperature and corrosion-resistant cladding material for nuclear fuel; Yttrium sputtering targets and Yttrium evaporation materials are important coating materials in vacuum coating. 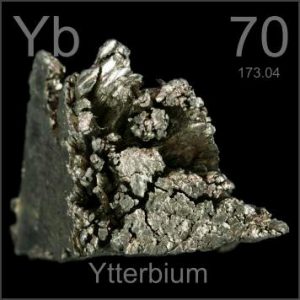 Ytterbium was discovered by the Swiss chemist Jean Charles Galissard de Marignac in 1878. It is named after a village in Sweden associated with its discovery. Ytterbium is a soft, malleable, and ductile element known for its bright silvery luster. The oxide produced forms a protective layer on the surface of the compound. Compounds of ytterbium are typically rare in nature. Ytterbium sputtering targets and Ytterbium evaporation materials can be used as a heat shield coating material. In addition, Ytterbium can be used as a material with super magnetostrictive properties (swelling in a magnetic field).