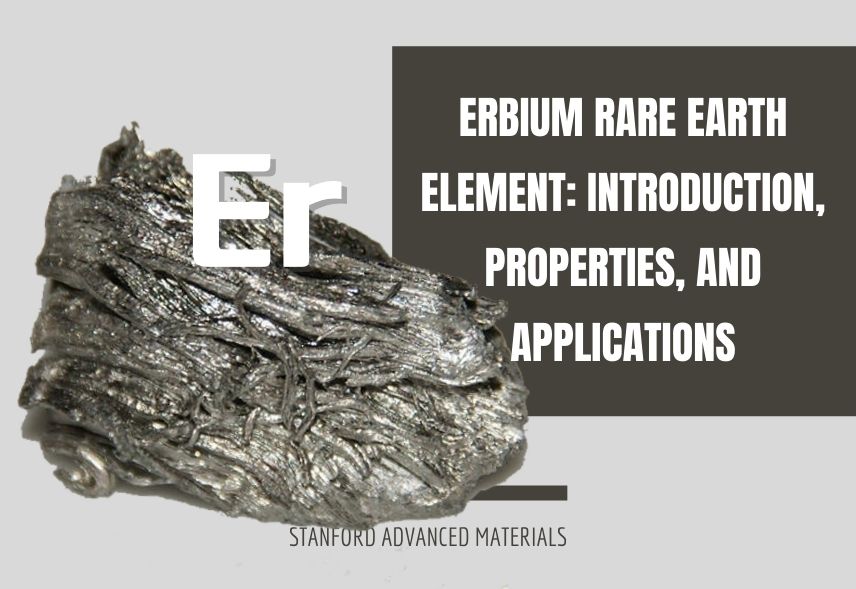 Erbium is one of the 17 rare-earth elements. This means it also belongs to the lanthanide series. Its atomic number is 68, and its symbol is Er. When one is told that Erbium is a rare-earth metal, one might expect it to be challenging to come across. However, Erbium ranks number 45 in the list of the most abundant elements on Earth.

This element is most abundant in a town called Ytterby, located in Sweden. Erbium gets its name from this small town. A Swedish surgeon known as Carl-Gustav Mosander discovered Erbium in 1843. He discovered Erbium as a compound known as Erbia. It was not until 1934 that two German workers, Wilhelm Klemm and Heinrich Bommer, isolated Erbium in its pure form. 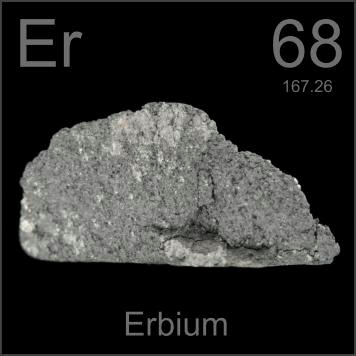 Erbium has a hexagonal, and closely packed lattice system, is relatively soft, and has about 29 radioisotopes. Its standard atomic weight is 167.259.

Most properties of erbium are due to its atomic number and periodicity. On the periodic table, it belongs to period 6, f-block. It is solid at room temperature. Its melting point is 1802 K, and its boiling point is 3141 K.

Erbium undergoes several chemical reactions. It tarnishes slowly in a humid atmosphere and is highly reactive with all halogens to form compounds with colors ranging from pink to violet. It is soluble in dilute sulfuric acid and combusts to form erbium(iii)oxide. On reacting with cold or hot water, it forms erbium hydroxide. Its reaction with the latter is fast, while its reaction with the latter is slow.

In addition, Erbium has a very high magnetic strength. It is ferromagnetic under 19K, antiferromagnetic between 19 and 79K, and paramagnetic at about 80K. It has a silvery appearance, but its salts have a pinkish color that makes them attractive.

Like other rare-earth metals, Erbium is usually used as an alloy or compound. It is rarely used in its isolated form. What are some of the uses of Erbium in the world today, and which of its properties are responsible for its uses?

Erbium produces laser energy that can be used in a dental procedure called laser enamel ablation. This is the removal of the enamel of a tooth with laser energy.

Erbium can be used for tumor ablation. Tumor ablation is a treatment procedure for cancer using laser energy.

Erbium chloride can be used as a catalyst. It catalyzes reactions that form alkanols and phenols.

Erbium bromide is a water-soluble compound. It can be used to treat water.

Erbium is combined with different metals to improve their quality. For example, it is mixed with vanadium to make vanadium more malleable. It is also added to nickel to raise its specific heat capacity.

Erbium salts have a pink color. These salts can be used to add color to glass, porcelain, and other materials. When these materials are colored, it improves their aesthetics and allows them to be used in making jewelry, windows, dinner sets, and mirrors.

Erbium compounds are used in the manufacture of control rods, which are used in nuclear reactors.

When dealing with Erbium, you want to note the following:

Erbium is a relatively abundant rare-earth metal. It is a crucial element in modern-day technology. Many industries worldwide use Erbium daily for many important processes and products due to its versatility. If you want to know more about rare earth elements, we would like to advise you to visit Stanford Advanced Materials (SAM) for more information.