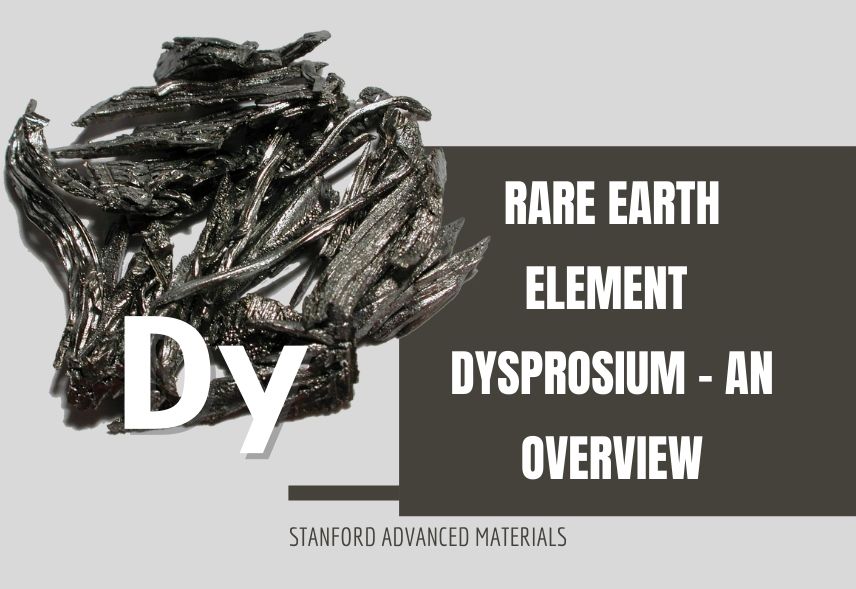 Dysprosium is a rare-earth element with a lustrous and silvery appearance. Like most other rare-earth metals, it belongs to the Lanthanide series. Its name was derived from the Greek word dysprositos which can be translated as hard to get. Dysprosium was discovered in 1886 by a scientist known as Paul Emile Lecoq de Boisbaudran. However, it was not until 1905 that Georges Urbain first isolated it.

China produces a good ninety-nine percent of all dysprosium produced every year. Other countries that produce dysprosium include the USA, Australia, Russia, and India. It is most commonly obtained from monazite sand. It can also be obtained from gadolinite, euxenite, polycrase, and fergusonite. Ion exchange and floatation processes are used to isolate dysprosium.

Like other elements, its periodicity is responsible for its properties. In the periodic table, dysprosium belongs to period 6, f-block. Also, it is solid at room temperature. Its melting point is 1680 K, and its boiling point is 2840 K.

It has a hexagonal and closely packed lattice system. It also has a very high magnetic strength. It is ferromagnetic under 87K- 90K, antiferromagnetic above 87-90 K, and paramagnetic at about 179K.

Its standard atomic weight is 162.5. Like most metals, its density varies with its state. When it is solid, its density is 8.54 g/cm3. However, when it is liquid, its density decreases to 8.37 g/cm3. Dysprosium is electropositive, and its oxidation state is +3. As regards its chemical properties, it tarnishes slowly in a humid atmosphere, it is highly reactive with halogens at temperatures above 473 K, and it is easily soluble in H2SO4.

Dysprosium is usually used in combination with other metals because it is difficult to isolate. What are the uses of dysprosium in the world today, and how do its various properties make it suitable for these uses?

This is one of the most common applications of dysprosium. Dysprosium cannot be demagnetized at very high temperatures. This particular property makes it an excellent permanent magnet.  The permanent magnets formed from dysprosium alloys can be used to manufacture electric cars and wind turbines generators.

Dysprosium is used in the manufacture of control rods used for nuclear reactors. This is because dysprosium can absorb many neutrons without undergoing fission. This property of dysprosium is its high neutron capture cross-section.

Data storage devices such as hard disks, floppy disks, compact disks, and flash drives can be produced with dysprosium alloys.

Dysprosium alloys can be used in ships’ sound navigation and ranging systems due to their magnetic property. Hence, dysprosium is relevant in the marine industry.

Alloys of dysprosium can be employed in infrared devices. Infrared devices can be used for night vision, astronomy, weather forecasting, communication, and even medicine.

Magnets made with dysprosium are more resistant to corrosion than most of their other counterparts. It is for this reason that it is sometimes used in place of Neodymium in the production of magnets.

Dysprosium is used in the manufacture of dosimeters. A dosimeter is a device that is used to measure ionizing radiation.

Dysprosium is indeed hard to get. This makes it quite expensive compared to other rare-earth metals. However, its numerous uses make it a highly sought-after rare-earth element. It is needed in the marine, automobile, biomedical, and telecommunication industries, to name a few. In terms of toxicity, keep in mind that soluble dysprosium salts are slightly toxic when taken orally, but solid dysprosium is not toxic.