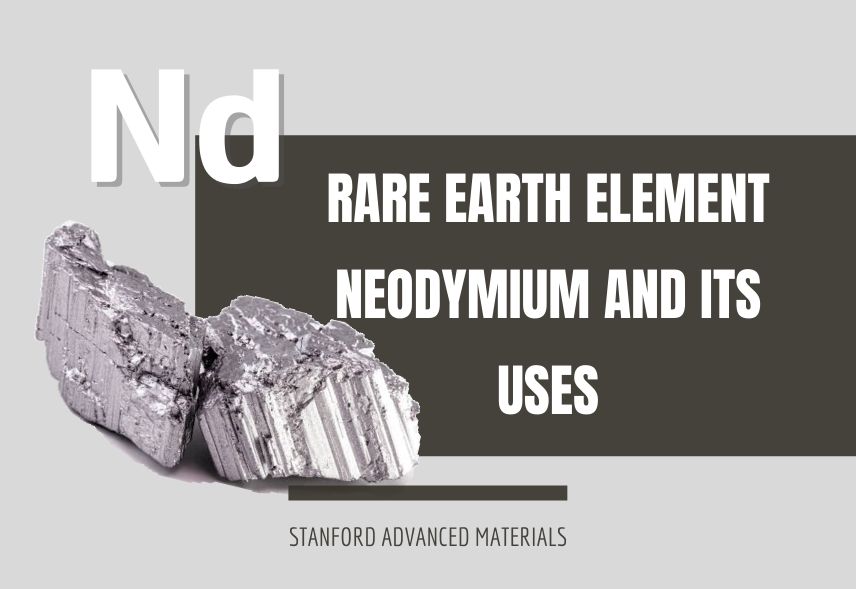 Neodymium is a metal with atomic number 60, belonging to the lanthanide series of metals on the periodic table. The name Neodymium is derived from the Greek word ‘neos didymos’, which means new twin. Neodymium is a rare-earth metal that is used with iron and boron to create powerful permanent magnets, which are called NdFeB magnets. It is an important element possessing some properties that make it useful for a number of different applications.

Neodymium is applied in electronic components and computer parts; it is used in magnetic resonance imaging (MRI) machines, and it is used as a crystal in lasers. The element was discovered by Austrian chemist Carl Auer von Welsbach in 1885, and it was later assigned the symbol Nd. This post discusses the natural occurrence and production of pure neodymium metal, its properties, and its uses in everyday life.

Neodymium is a ductile and malleable silvery-white metal. The lament has been shown to possess strong paramagnetic properties, and it orders antiferromagnetically at 7.5 and 19.9 K (−265.7 and −423.9 °F), showing the development of separate spontaneous magnetic moments on different independent sites, which are cubic and hexagonal. It has a high specific heat capacity, making it useful in cryocoolers.

Currently, a total of 31 radioactive isotopes of neodymium, excluding the nuclear isomers of neodymium, have been characterized. These have a half-life ranging from 0.65 seconds to 7.9 × 1018 years. The least is neodymium-125, while the highest is neodymium-150. The element has an atomic weight of 144.24g, melts at 1,870 °F with a boiling point of 5,565 °F, and has oxidation states +2 (which is rare and unstable) and +3.

Chemically, neodymium readily undergoes oxidation in the presence of air to form the oxide, Nd2O3. This also spalls, exposing it to further oxidation. For this reason, it is best to store the metal in plastic and keep it covered in a vacuum or an inert atmosphere. Neodymium has also been shown to react slowly with mineral acids, except for hydrofluoric acid (HF).

Although neodymium occurs naturally in the earth’s crust, it is not as abundant as most other elements. It is found in its metallic form, mostly at a concentration of about 18%. Of all the rare-earth metals, only yttrium, lanthanum, and cerium are more abundant than neodymium. In the earth’s crust, there’s two times more quantity of Neodymium than lead; it is also about half as much as natural copper.

Neodymium element occurs in the minerals monazite and bastnasite and is a product of nuclear fission. During the separation and purification of neodymium, liquid-liquid separation or ion-exchange techniques are typically used. The metal is obtained from the electrolysis of fused halides of the metal. An alternative method is the metallothermic reduction of the fluoride with calcium.

Neodymium is a rare-earth metal that is used with iron and boron to create powerful permanent magnets. The element has high melting and boiling points. So far, up to 3 different isotopes of neodymium have been characterized, some of which are quite beneficial. A typical application of neodymium is in the electronics, such as TV sets and computer components. If you want to know more about rare earth elements, we would like to advise you to visit Stanford Advanced Materials (SAM) for more information.