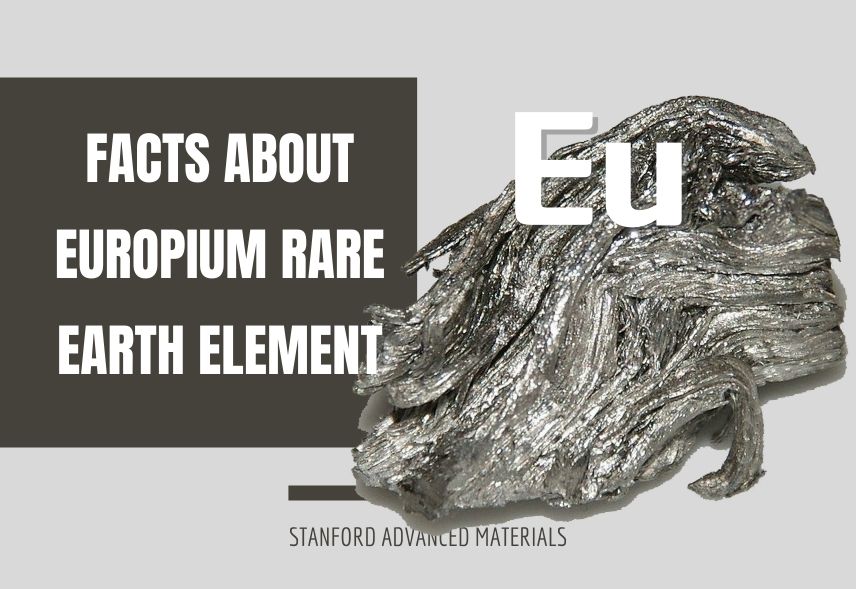 Europium is named after Europe. Paul-Émile Lecoq de Boisbaudran, a French chemist, discovered this rare-earth metal by extracting it from samarium-gadolinium concentrates in 1890. However, Eugene-Anatole Demarcay, a French chemist as well, was the first person to isolate Europium in its pure form. Europium is derived from bastnasite and monazite. It can also be found in the sun and stars. 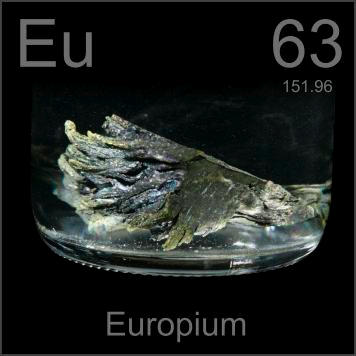 Europium is a ductile, lustrous rare-earth element with a silvery appearance. It is phosphorescent, giving off a red glow. Europium loses its characteristic luster very easily to oxidation.

Europium’s periodicity is responsible for its properties. On the periodic table, Europium belongs to period 6, f-block. Europium has a body-centered cubic lattice system and a standard atomic weight of 151.964. It has two oxidation states which are +2 and +3. +3 is the more stable of the two states. It is also more common than the +2 state.

Furthermore, this rare-earth metal is solid at room temperature. Its melting point is 1099 K, and Its boiling point is 1802 K.

Europium is the least dense rare-earth metal. Its density is 5.264 g/cm3 when it is solid. However, when it is liquid, its density decreases to 5.13 g/cm3.

Europium has many chemical reactions. It oxidizes in the air at a fast rate and is easily combustible. It is soluble in dilute H2SO4 and reacts with all halogens. When it reacts with water,  it forms europium hydroxide.

Europium is one of the softest rare-earth metals. It is soft enough to be cut through with a knife. It is paramagnetic above 90 K but is antiferromagnetic below 90 K. It is also electropositive, and its electronegativity on the Pauling scale is 1.2.

Europium has several applications in the world today. These applications are owing to both its physical and chemical properties. Like most other rare-earth metals, it is usually used in the form of a compound or an alloy. Here are some of the applications of Europium:

Like color television screens, Europium can also be used in computer screens. The phosphorescent property of Europium is again responsible for this application.

Europium is used as a dopant for semiconductors. The doped material can be used for laser technology.

Europium has a high neutron capture cross-section. This allows it to be used as a control rod in nuclear reactors

Europium is one of the most expensive rare-earth metals, and it is less used than the other rare-earth metals. However, the profits of its application generally outweigh the cost of its extraction. It is especially important in industries that use phosphorescence.