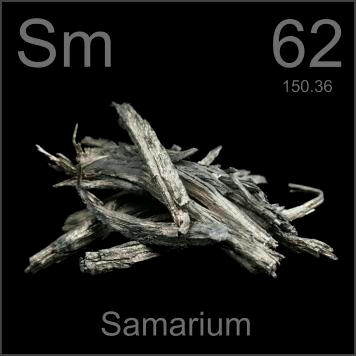 Samarium sputtering target is a silvery target composed of high purity samarium metal. Samarium is a chemical element that originated from Samarskite, the name of the mineral from which it was first isolated. It was first mentioned in 1879 and observed by P.E.L. de Boisbaudran. The isolation was later accomplished and announced by P.E.L. de Boisbaudran. “Sm” is the canonical chemical symbol of samarium. Its atomic number in the periodic table of elements is 62 with a location in Period 6 and Group 3, belonging to the f-block. The relative atomic mass of samarium is 150.36(2) Dalton, the number in the brackets indicating the uncertainty.

Other applications of samarium are:

1. No bonding service is presently available for the samarium sputtering target. 2. Samarium target has high chemical activity when exposed to the environment. Oil packaging and clean procedure are required to prevent it from chemical reactions.

Our samarium sputter targets are carefully handled to prevent damage during storage and transportation and to preserve the quality of our products in their original condition.

SAM’s samarium sputtering targets are available in various forms, purities, sizes, and prices. We specialize in producing high purity thin film deposition materials with the highest possible density and smallest possible average grain sizes for use in semiconductor, chemical vapor deposition (CVD) and physical vapor deposition (PVD) display and optical applications. Please send us an inquiry for the current prices of the sputtering targets and other deposition materials that are not listed.