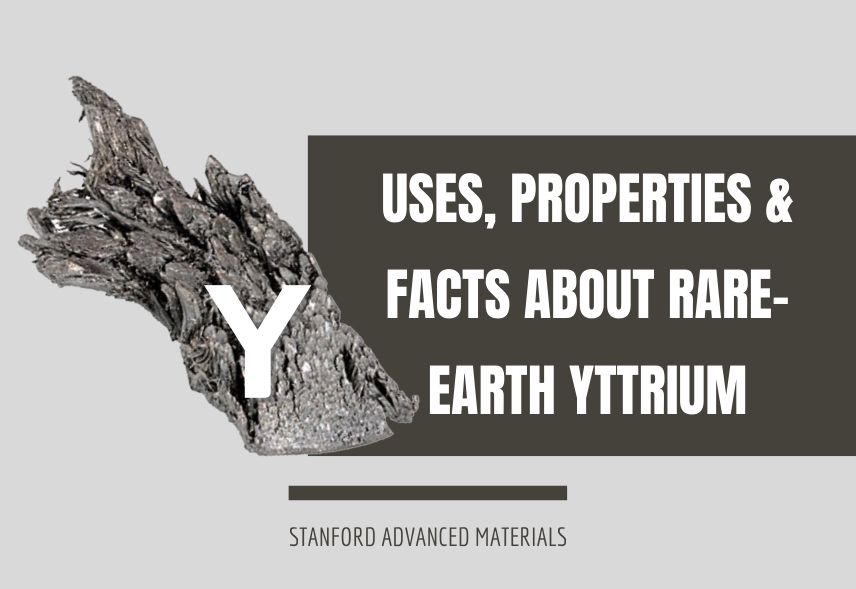 Yttrium (pronounced as IT-ree-em) is one of the important rare-earth elements, considering its application in different areas, such as in lasers, ceramics, camera lenses, and many other items. Yttrium is also applied as an additive in alloys. In this post, you’ll learn more about the discovery, production, properties, and uses of the yttrium element.

Yttrium is a rare-earth element belonging to the transition family of elements and lanthanide metals. It is considered to be one of the rare earth elements having 50 isotopes, with only yttrium-89 being the only stable isotope. The chemical element is denoted by the symbol Y and atomic number 39. Yttrium is a silvery-metallic transition metal with similar chemical properties as lanthanide metals. The element is usually found in combination with other lanthanide elements in rare-earth minerals. It has never been found in nature as a free element.

Important applications of yttrium are in the production of LEDs and phosphors, electrodes, electrolytes, alloys, electronic filters, lasers, and different medical applications. The element has no known biological role. However, exposure to yttrium compounds has been shown to induce lung disease in humans.

Yttrium is named after ytterbite, a mineral first identified in 1787 by the Swedish army lieutenant and part-time chemist, Carl Axel Arrhenius. Arrhenius named the mineral after Ytterby, a village in Sweden, where it was discovered. Initially, he thought he had discovered a new mineral for the tungsten element.

However, after sending out samples of the mineral for analysis to different labs, Johan Gadolin, who was based in Finland, announced in 1794 that Arrhenuius’ sample contained a new ‘earth’ that made up 38% of its weight. The substance was called an ’earth’ because it was yttrium oxide, Y2O3 that could not be reduced further by heating with charcoal. Gadolin isolated the yttrium within the mineral. 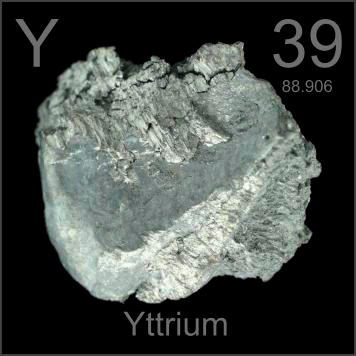 Later in 1843, another Swedish chemist, Carl Gustaf Mosander conducted further studies on yttrium samples and discovered the presence of three oxides, which he called yttria, erbia, and terbia. They are currently known as yttrium oxide (white), terbium oxide (yellow), and rose-colored erbium oxide, respectively. In 1878, a fourth oxide, ytterbium oxide, was also identified.

Occurrence and Production of Rare-Earth Yttrium

Yttrium is never found as a free element; instead, the element occurs as a part of most rare-earth minerals. It is found in some uranium ores. Yttrium is found in soil in concentrations of 10-150 ppm (dry weight), as well as in sea water at 9 ppt. A notable example is the lunar rock samples collected during the American Apollo Project, which contained high amounts of yttrium. The ores of yttrium are mostly obtained in Canada, Brazil, China, Australia, Hungary, and Greece.

While yttrium does not exhibit any function in biological systems, it is found in very small amounts in most organisms, including humans. The element has been found to concentrate in the liver, kidney, spleen, lungs, and bones. Studies have also indicated the presence of yttrium in edible plants in concentrations between 20 ppm and 100 ppm, with the seeds of woody plants having the highest known concentrations.

Yttrium is found in higher concentrations in the heavy rare-earth elements (HREE) group, primarily because of its ion size, even though it has a lower atomic mass. It is chemically similar to lanthanides and occurs in the same rare-earth minerals. This means that it is extracted by the same refinement processes.

Yttrium can be produced commercially from common rare-earth ores, such as bastnäsite, Monazite, Xenotime, ion absorption clays or Lognan clays. To obtain pure Yttrium from the mixed oxide ores, the ores are dissolved in sulfuric acid and fractionated by ion exchange chromatography. Upon the addition of oxalic acid, yttrium oxalate precipitates, which is later converted into the oxide by heating under oxygen.

By reacting the yttrium oxide with hydrogen fluoride, yttrium fluoride is obtained. With a suitable counter-ion in solution, yttrium salts of 99.999% purity can be obtained.

Yttrium has up to 35 different isotopes that have been characterized. Most of these isotopes are common products of the nuclear fission of uranium in nuclear explosions and nuclear reactors. However, only isotope yttrium-89 is stable.

Rare-Earth Yttrium is a transition metal with atomic number 39, which is characterized as a rare-earth element. It is found naturally in the same ores as most rare earth. If you want to know more about rare earth coating materials, we would like to advise you to visit Stanford Advanced Materials (SAM) for more information.