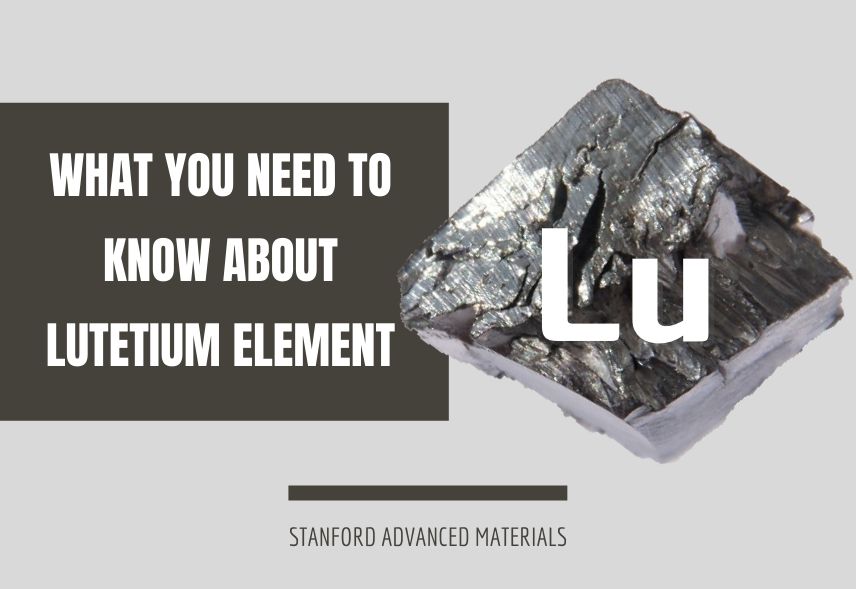 Introduction: What is Lutetium?

Lutetium is a silvery-white rare-earth metal. It is the last element in the lanthanide series. Lutetium was independently found by three scientists (Georges Urbain, Baron Carl Auer von Welsbach, and Charles James) as an impurity in the mineral ytterbia, which was previously thought to consist only of ytterbium. It has an atomic number of 71 and is designated the symbol, Lu.

Lutetium is not particularly abundant in nature, but it is more common in the earth’s crust than silver. This rare-earth element mostly occurs in association with the yttrium element. It has a radio-isotope, Lutetium-176, which is a relatively abundant (2.5%) radioactive isotope with a half-life of approximately 38 billion years. This isotope is used to determine the age of minerals and meteorites. Lutetium is sometimes used in metal alloys and as a catalyst in several chemical reactions. 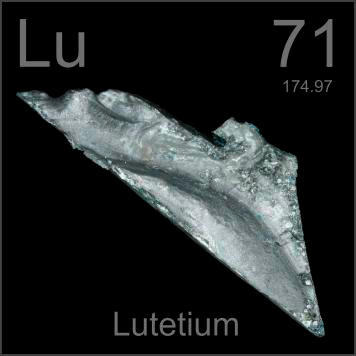 In its pure form, lutetium metal occurs as a silvery-white material that is stable in air. Lutetium dissolves easily in dilute acids, except hydrofluoric acid (HF). In this case, a protective layer of LuF3 forms on the surface of the material, preventing further dissolution of the metal. The metal possesses paramagnetic properties, starting from 0 K (−273 °C or −460 °F) to its melting point, which is at 1,936 K (1,663 °C or 3,025 °F. It also has a temperature-independent magnetic susceptibility, which is approximately 4 (−269 and 27 °C) and 300 K (−452 and 80 °F).

Natural lutetium has two isotopes, which are the stable lutetium-175 (constitutes 97.4%) and radioactive lutetium-176 (2.6%), with a 3.76 × 1010-year half-life. Besides the lutetium-176 isotope and the nuclear isomers, there are 33 more known radioactive isotopes of lutetium that range in mass from 150 to 184. Of these, the least stable, which is lutetium-150, has a half-life of 45 milliseconds, while the most stable isotope is lutetium-176.

Lutetium element behaves as a typical rare earth metal and forms a series of compounds in oxidation state +3, including lutetium sesquioxide, sulfate, and chloride. In a chemical reaction, the atom loses its two outermost electrons and the single 5d-electron. Each lutetium atom has 71 elements and is the smallest among all lanthanide atoms. Due to the lanthanide contraction, it has the highest density, melting point, and hardness among all lanthanide elements.

Lutetium has also been shown to participate in chemical reactions. Compounds of Lutetium always have the element in the +3 oxidation state. It is also present in the 0, +1, and +2 oxidation states. Lutetium forms aqueous solutions of salts, typically colorless, and turns to white crystalline solids when they dry. Iodides are an exception in this case. Other soluble salts of Lutetium, including nitrates, sulfates, and acetate form hydrates upon crystallization. The oxides, hydroxides, fluorides, carbonates, phosphates, and oxalates of Lutetium are insoluble in water.

The pure Lutetium metal is slightly unstable in the atmosphere at standard temperature and pressure. However, it readily burns at 150 °C to form lutetium oxide. The compound formed can absorb water and carbon dioxide, and can be used to remove vapors of those compounds from closed atmospheres. When lutetium reacts with water under cold temperatures, the progress is slow, but fast when the temperature is cold. The reaction produces lutetium hydroxide that is formed in the reaction.

Lutetium metal reacts with the four lightest halogens (fluorine, chlorine, bromine, and iodine) to form trihalides, all soluble in water, except the fluoride. Lutetium dissolves readily in weak acids and dilutes sulfuric acid to form solutions that contain the colorless lutetium ions.

There is currently no known lutetium-dominant mineral, occurring in nature, and pure lutetium metal is pretty difficult to prepare. In most cases, the element is found with almost all other rare-earth metals.

Its primary commercial source is the by-product obtained from the processing of the rare earth phosphate mineral monazite PO4. Lutetium is also found in the Earth’s crust (about 0.5 mg/kg). It is mainly mined in China, the United States, Brazil, India, Sri Lanka, and Australia.

Lutetium is rarer than most other lanthanides, even though it is chemically similar in many ways. Besides, its production is difficult and costly. This inevitably translates to very few commercial uses. Here are some of the typically known applications of rare earth metal Lutetium:

The lutetium element is one of the most important elements in nature. It is a rare-earth metal, mostly found in the earth’s crust, and naturally occurs as a silvery-white substance resistant to corrosion in dry air. It has several isotopes, one of which is used to determine the age of minerals and meteorites. Lutetium itself can also be used in metal alloys and as a catalyst in some important chemical reactions. If you want to know more about rare earth elements, we would like to advise you to visit Stanford Advanced Materials (SAM) for more information.