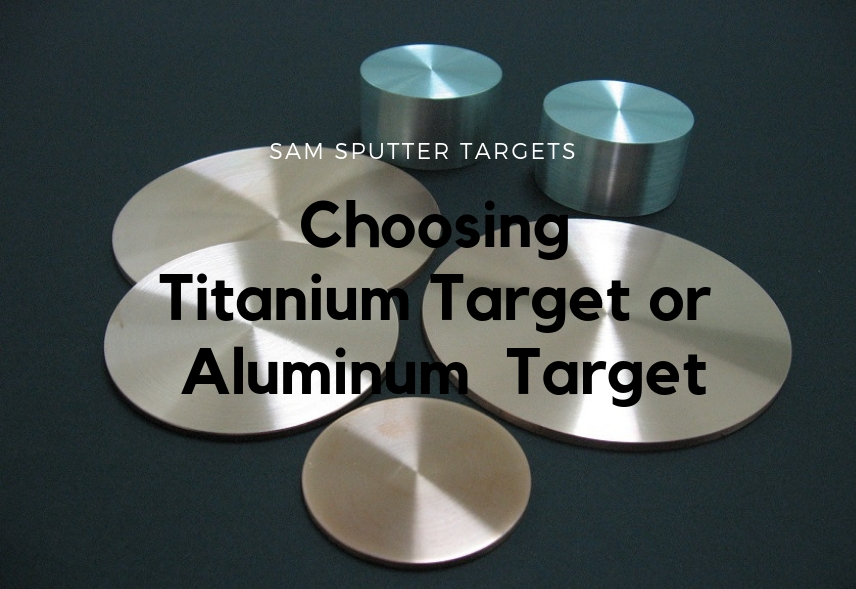 There are many elements that affect the final choice of an application. A simple comparison of the chemical and mechanical properties of the two kinds of sputtering targets will show the differences between them and what might be better for your application.

Titanium was discovered in the late 1700s by German chemist Martin Heinrich Klaproth, who named the metal after the Greek Titans, a clan of powerful gods and goddesses. Titanium is a very strong metal. It’s lighter than steel, and it can be made much thinner without sacrificing structural integrity due to its high tensile strength. Titanium is very rigid and durable, and titanium films can last decades without any sign of wear when properly cared for.

Aluminum, in contrast, is the most abundant metallic element in the earth’s crust. Compared with the titanium mentioned above, Aluminum was discovered much later. In 1808, the British chemist Sir Humphry Davy confirmed the existence of alum and named the substance to Alumium (later changed to Aluminum). Aluminum has a very low-density that it is lighter than titanium and steel.

Titanium sputtering target is lightweight, strong, and resistant to corrosion, which makes it a very desirable material. Unfortunately, titanium is difficult to extract and process, which accounts for its higher price. It has good thermal conductivity, is non-magnetic, and non-toxic.

The aluminum sputtering target is an economical option that offers a good weight-to-strength ratio at a comparatively lower price. Aluminum is a reliable, strong metal with good corrosion resistance and high fracture toughness. Its abundance in earth and easy fabrication make its price down.

When considering your budget, the aluminum sputtering target is the more financial choice. Aluminum films can cost hundreds or thousands less than titanium films. However, titanium sputtering target is the clear winner for stiffness and strength, and it is ubiquitously used in top-level industries. Titanium films last years longer than aluminum films, making titanium target a good choice for the long term.

If you still hesitate to choose one from them, maybe titanium-aluminum alloy sputtering target is a good choice for you. These alloy sputter targets usually combine the advantages of titanium and aluminum but have a lower price than titanium.

Please visit Stanford Advanced Materials for more information. We are a global sputtering target manufacturer established in 1994, and we offer all kinds of high purity film coating materials.