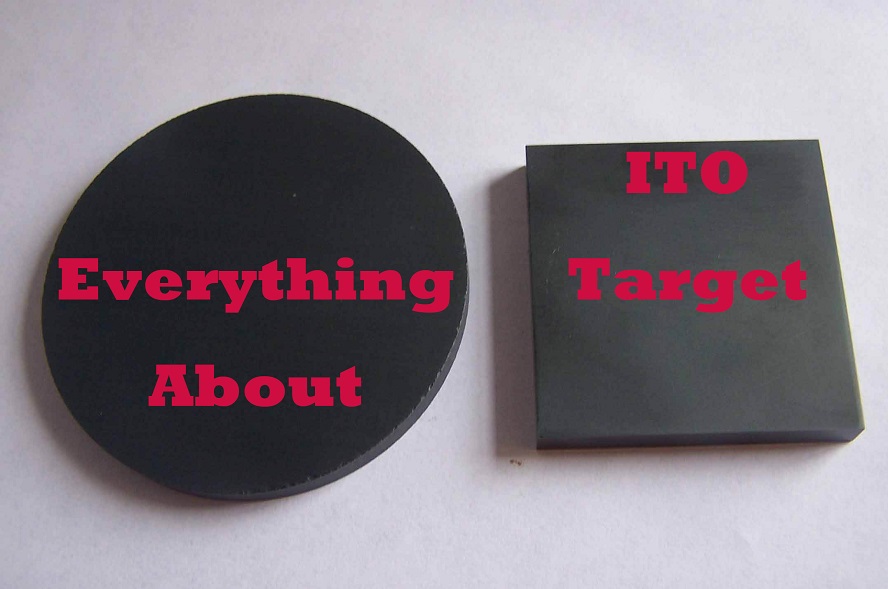 The full name of ITO is indium tin oxide, a composition of indium, tin, and oxygen with different proportions. The substance of ITO and ITO sputtering target is the same, the latter of which is actually a black-gray ceramic semiconductor formed by mixing indium oxide and tin oxide powder in a certain ratio.

How to make ITO sputtering target

At present, there are mainly four molding methods for preparing the ITO target, and each of them has its advantage in a specific application.

Vacuum hot pressing densifies the ITO powder by utilizing thermal energy and mechanical energy, and it can produce a high-density ITO ceramic target with a density of 91% to 96%. This method can easily obtain an ITO target that is close to the expected density and whose porosity is close to zero. However, limited by the equipment and the mold size, vacuum hot pressing is less advantageous in preparing a large-sized sputtering target.

Hot isostatic pressing (HIP) prepares ITO sputtering target by sintering under pressure or pressing at high temperatures. Similarly with vacuum hot pressing, HIP can obtain a product with high density (almost a theoretical density) and excellent physical and mechanical properties in the heated and pressurized state. But it is also limited by the pressure of the equipment and the size of the cylinder.

Room temperature sintering prepares a high-density target preform by slurry casting or pre-pressing first and then sinters it under a certain atmosphere and temperature to obtain the ITO target. Its biggest advantage over others is the ability to produce large size sputtering targets. But the purity of the target made by this method is lower, compared to other sintering methods.

Cold isostatic pressing (CIP) uses rubber or plastic as a mold covering material at a normal temperature and uses a liquid as a pressure medium to transfer ultra-high pressure. CIP can also prepare ITO sputtering targets of a larger size. And it is cheap, which is suitable for mass production. But CIP requires the materials sintered at a high temperature of 1500~1600 °C in a 0.1~0.9 MPa pure oxygen environment, which has a higher risk.

These three terms are co-related. In short, ITO conductive glass is made by coating a layer of ITO film on a piece of ultra-thin glass by sputtering or evaporation. Here, the ITO target is the source that provides indium tin oxide atoms; ITO film is obtained when these indium tin oxide atoms are deposited on the substrate (the glass), and the glass coated with ITO film is called ITO conductive glass.

The future of the ITO target is prosperous, but there are still difficulties that we need to overcome. The developing trend of ITO target can be concluded into four points:

Point 4 has been one of the hotspots and difficulties in this field. At present, the planar target still dominates the sputter coating industry due to its multiple advantages such as simple structure, strong versatility, and good uniformity. However, the utilization rate of the planar target is low. Recently, sputtering target manufacturers are actively researching and developing a new type of sputtering target (such as rotatory target) to achieve high utilization.

Thanks for reading this passage and hope that you now have a basic understanding of ITO Sputtering Targets. Stanford Advanced Materials (SAM) is a leading sputtering target manufacturer based in Lake Forest, California. If you feel interested in the ITO sputtering target, you can go to our product page for more information, or directly send us an inquiry. You can also contact us via target@samaterials.com. Free samples are available.