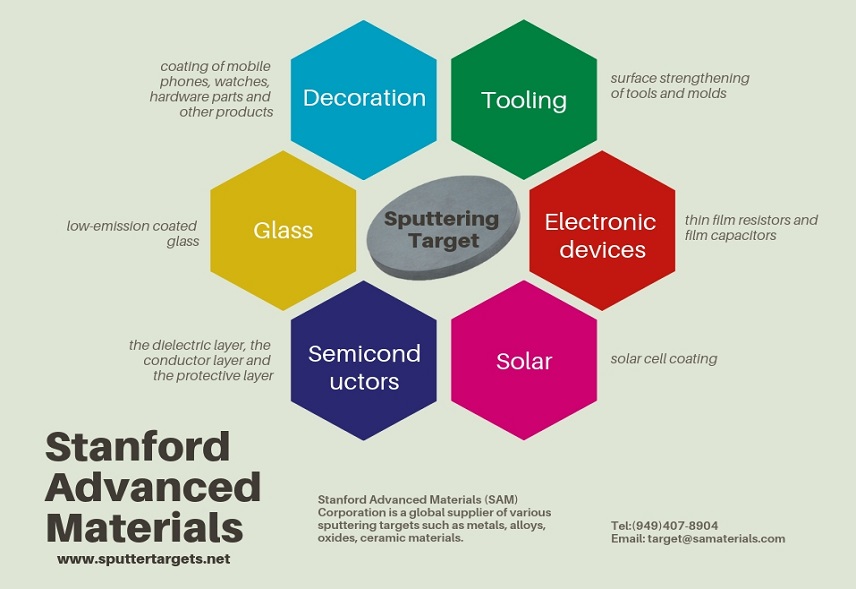 The sputtering target refers to the sputtering source that is deposited on a substrate to form various functional films under appropriate process conditions. Sputtering targets are widely used in many fields such as decoration, tooling, glass, electronic devices, semiconductors, and solar cells.

Tooling coating is mainly used for surface strengthening of tools and molds, which can significantly improve the service life of tools and molds and the quality of processed parts. In recent years, driven by the development of the aerospace and automotive industries, the technical level and production efficiency of the global manufacturing industry have made great progress, and the demand for high-performance tools and molds is increasing. At present, the global tool and die coating market is mainly in Europe, America and Japan. According to statistics, the proportion of coatings for machining tools in developed countries has exceeded 90%. The main types of targets for tooling coating are TiAl target, chromium aluminum (CrAl) target, Cr target, Ti target, and the like.

The application of the target on the glass is mainly to produce low-emission coated glass. By magnetron sputtering, we can obtain a multi-layer film on the glass, which can achieve the functions of energy saving, light control, and decoration. Low-emission coated glass is also known as energy-saving glass. In recent years, with the increase in energy conservation and emission reduction and improvement in people’s quality of life, traditional architectural glass is gradually being replaced by energy-saving glass. It is in this market demand that almost all large glass deep-processing companies are rapidly increasing the coated glass production line. Correspondingly, the demand for sputtering targets is rapidly increasing. The main targets used for glass coating are the silver (Ag) target, Cr target, Ti target, nickel-chromium (NiCr) target, zinc-tin (ZnSn) target, silicon-aluminum ( SiAl) target, titanium oxide (TixOy) target, etc.

In addition to producing low-emissivity glass, another important application of the target is to prepare automotive rearview mirrors, mainly using chromium targets, aluminum targets, titanium oxide targets, and the like. With the increasing requirements for automotive rearview mirrors, many companies have switched from the original aluminizing process to the vacuum-sputtering chrome process.

The rapid development of information technology requires higher integration of integrated circuits and smaller size of unit devices in circuits. The size of components ranges from millimeters to micrometers to nanometers. Each unit is internally composed of a substrate, an insulating layer, a dielectric layer, a conductor layer, and a protective layer. Among them, the dielectric layer, the conductor layer, and even the protective layer require film coating. Therefore, the sputtering target is one of the core materials for preparing an integrated circuit. The main targets for semiconductor coating are tungsten (W) target, tungsten-titanium (WTi) target, titanium(Ti), tantalum(Ta) target, aluminum(Al) target, copper (Cu) target, etc. Semiconductor coating requires high target purity, generally 4N or more, so the target price for semiconductor coating is higher.

With the decline of traditional fossil fuel energy, the world has turned its attention to renewable energy. Solar energy has become the focus of attention with its unique advantages, converting solar energy into heat and electricity. The light-to-electrical conversion is accomplished by the solar cell that directly converts light energy into electrical energy through the photoelectric effect.

We have summarized the sputtering targets used in the six mentioned fields. (Sputtering Target Used for Different Applications.pdf)