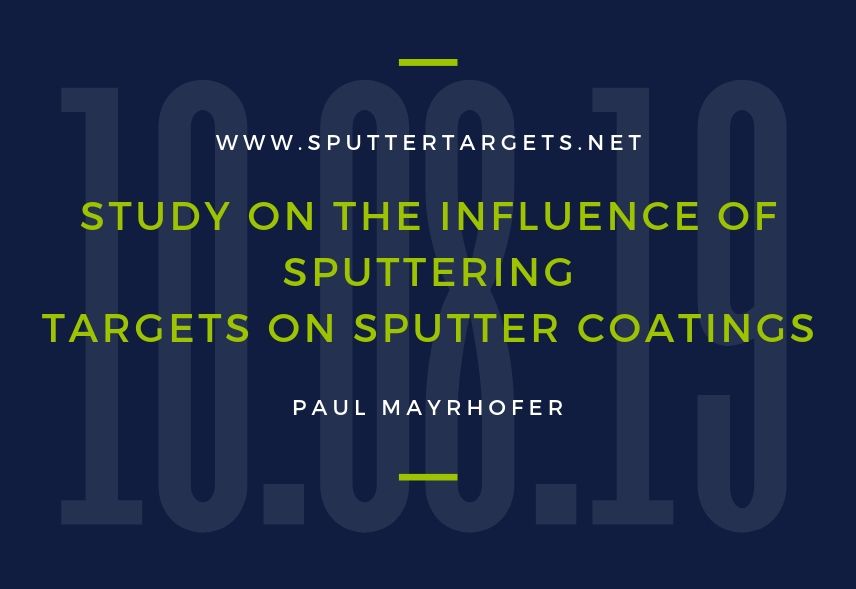 AlxCr1-xN coatings have excellent mechanical properties and oxidation resistance and are therefore of high application value in a variety of industrial applications. In recent years, the effects of various deposition parameters (such as partial pressure, gas mixture or temperature) on the sputtering process have been studied, but there has been little research on the influence of the sputtering target itself.

All of the reactive sputtered coatings exhibited a distinct columnar structure with a preferred orientation, while the non-reactively deposited coating from the ceramic target was a nanocrystal with a preferred orientation. In addition, this non-reactively sputtered nitride coating has the highest hardness and twice the deposition rate from reactive sputtering of metal Al/Cr targets. Likewise, for coatings prepared from ceramic targets, especially with regard to the onset of Cr-N dissociation, thermal stability is also transferred to higher temperatures.

Chromium nitride coatings are widely used in the industry due to their excellent properties such as high hardness, wear resistance and oxidation resistance. It is well known that the addition of Al to form a ternary hard Al-Cr-N coating enhances the properties of the chromium nitride coating. Recent studies have shown that by increasing the Al content, the x of such an AlxCr1-xN coating can reach ~0.75, which corresponds to the solubility limit in the cubic (c) NaCl structure. The results show that the hardness of the single-phase c-structure AlxCr1-xN coating is about 38 GPa when x = 0.7. However, if the Al content is too much, the properties of the film may be lowered to form a two-phase cubic/wurtzite or even a single-phase wurtzite (w) structure.

In addition, there is a growing interest in the interrelationship between coating properties and deposition parameters. We have known that we can achieve a densification, smaller grain sizes, tailor made residual stress characteristics, a preferred crystallographic orientation, or even stabilization of the desired cubic structure by increasing the kinetic energy during film growth (for example, by increasing the bias voltage). However, little information is available about the effect of the sputtering target material itself on the microstructure of the AlxCr1-xN coating and therefore the effect on the performance of such coatings.

The scientists, therefore, compared the effects of sputter deposition of reactive and non-reactive TiN coatings on the structure and properties of the resulting film. It has been shown that by using a TiN ceramic sputtering target material as a cathode, a higher deposition rate can be obtained from a metal Ti target, depending on the ion/atomic flux, stoichiometric coating, as compared to conventional reactive magnetron sputtering. The hardness of the layer is extremely high and the ion energy during deposition.