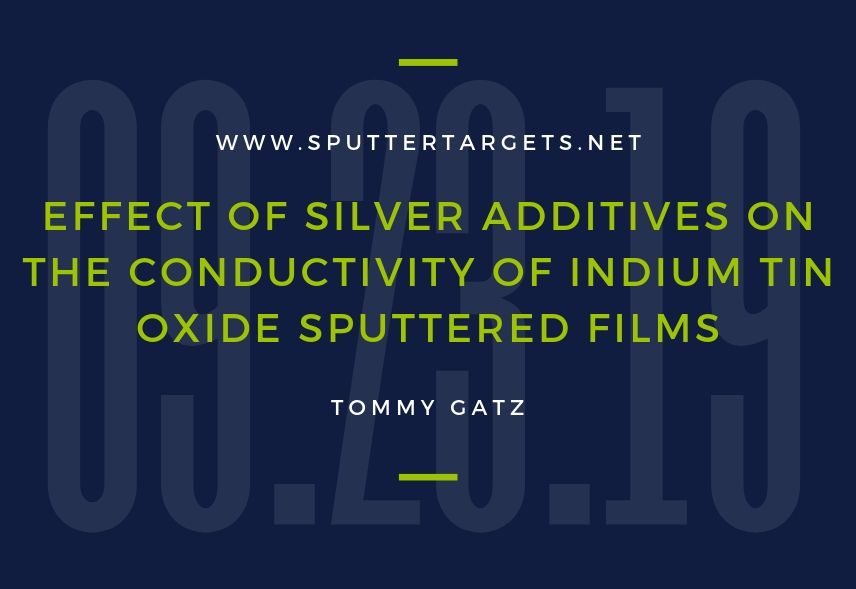 Transparent conductive films have many applications, and indium tin oxide films have received great attention in the glass manufacturing industry due to their excellent properties. However, the manufacturing process of the indium tin oxide film requires a higher temperature, which limits its application. In order to reduce this temperature, various “sintering agents” have been taken into consideration. Recently, silver additives have received increasing attention. Its effect on the ITO film is two-fold. A small addition can actually reduce the processing temperature, but it also increases the luminous absorptance of the film.

Silver can be used as an additive for indium tin oxide sputtering coating because silver target sputters are much faster than alloyed indium and tin. During the experiment (20 min), the silver sputtering target is covered by a shutter. The shutter was opened on only occasions during the 20 min for approximately 2 s each time. Because the silver sputter target demands other working conditions than those of the alloy, the reactive plasma for the alloy target was shut down and a new plasma was lit for the silver target, using only argon and higher gas pressure. The substrate is obtained to obtain a uniform film. The specific experimental reaction conditions are as follows.

The experiment was divided into five samples. One sample was not added with silver (0 mol%), and the other four samples were added with different doses of silver (1, 2, 6, 9 mol/%); each sample was divided into four parts, one part was left unaffected, and the Others were annealed at 100, 200 and 300 ° C in a reducing gas with composition of 7 vol.% H and 93 vol.% N2.

The conclusion we have obtained is as follows：

1. Use a small amount of silver additive to increase the conductivity of the ITO film by up to twice;

2. The highest conductivity is obtained in samples annealed at 300 °C due to the largest number of charge carriers.

3. When the content of silver additive is higher than 6 mol%, the electrical conductivity of the ITO film decreases. We believe that this is due to an increase in the number of grain boundaries, which leads to a decrease in carrier mobility.