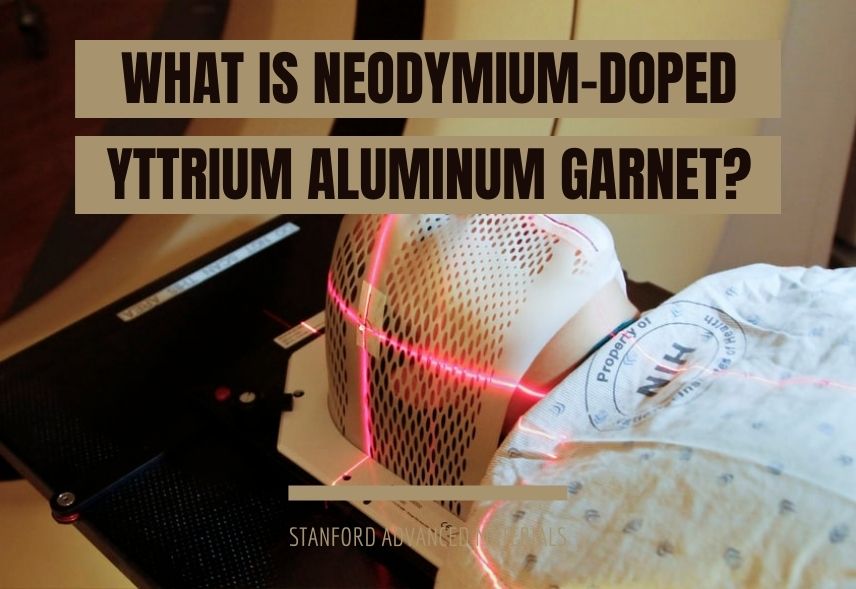 Neodymium-doped Yttrium Aluminum Garnet (Nd:YAG) can be described as a synthetic crystal used as a lasing medium in high-powered solid-state lasers. It consists of Neodymium, Aluminum, and Oxygen in the following proportion: Y3Al5O12.

The dopant in the mix is triply-ionized neodymium, Nd(III). It replaces about 1% of the yttrium ions in the host yttrium aluminum garnet (YAG) host crystal structure. This is because the two ions (ionized neodymium and yttrium) are similar in size. The same way the red chromium ion in ruby lasers helps to sustain the stability of the structure, the neodymium ion provides the lasing activity in the crystal.

Many manufacturers produce neodymium-doped yttrium aluminum garnets with many different levels of doping, depending on the specifications of the users. You can also find many standard grade specifications, such as the military-grade Mil-Spec; ACS, reagent and technical-grade; the food, agricultural, and pharmaceutical grade, and so on. Neodymium-doped Yttrium Aluminum Garnet (Nd:YAG) is used industrially and commercially in many ways.

Regarding the technology used in doping yttrium aluminum garnet with neodymium, Nd:YAG lasers are optically pumped using a flash tube or laser diodes. Although the Nd:YAG lasers undergo transitions near 946, 1120, 1320, and 1440 nm, they typically emit light with a wavelength of 1064 nm, in the infrared. They typically absorb light between 730–760 nm and 790–820 nm bands.

What is laser treatment?

While the word LASER represents an acronym for Light Amplification by Stimulated Emission of Radiation, the term laser treatment typically refers to the application of this technology in cosmetology and medical care. For instance, poor vision is one of the issues that can be corrected by laser treatment.

Theodore H. Maiman built the first laser in 1960 at Hughes Research Laboratories with inspiration from the theoretical works of Charles Hard Townes and Arthur Leonard Schawlow. Laser treatment is one of the ways Nd:YAG is applied. While Nd:YAG is useful in a host of other applications like the automotive industry, the military, industrial manufacturing, etc., it is widely used in medicine to treat a number of conditions through laser treatment.

In other words, an important aspect of laser treatments today is Nd:YAG. Below, we discuss how (Neodymium-doped Yttrium Aluminum Garnet) Nd:YAG laser is utilized in laser treatment?

How is Nd:YAG laser used in Laser Treatment?

Nd:YAG laser is used to treat different medication conditions, such as pigmented lesions, vascular lesions, tattoos, etc. For example, the Nd:YAG laser was the first type of laser used in urology to sustain excellent hemostasis in patients, reducing the need for postoperative bladder lavage. It typically utilizes a crystal of neodymium that produces a light that’s invisible at a continuous wavelength of 1064 nm.

Thermotherapy: Nd:YAG lasers emitting light at 1064 nm are the most widely used lasers for laser-induced thermotherapy. Here, the beam is used to ablate benign or malignant lesions in various organs.

Oncology: Nd:YAG lasers have been utilized to eliminate skin cancers. They can also be used to reduce benign thyroid nodules and for destroying primary and secondary malignant liver lesions.

Cosmetology: Nd:YAG lasers are also useful in cosmetic medicine for laser hair removal and also for treating minor vascular defects like spider veins appearing on the face and legs. These lasers can be used to treat venous lake lip lesions, and even recently, have been used to treat dissecting cellulitis of the scalp.

Hysteroscopy: By applying hysteroscopy, the Nd:YAG laser has been shown to be effective for removing uterine septa from the inside of the uterus.

Podiatry: Even when it comes to the medical care and treatment of the foot, Nd:YAG lasers help in the treatment of a fungus infection of the toenail, known as onychomycosis. However, more research is suggested to fully understand the benefits of Nd:YAG laser treatment for this condition.

Other types of laser treatment

Besides Neodymium-doped Yttrium Aluminum Garnet laser treatment, there are other very useful lasers applied in medical care. Some of these are:

Thank you for reading our article and we hope it can help you understand more about Neodymium-doped Yttrium Aluminum Garnet. If you want to know more about laser crystals, we would like to advise you to visit Stanford Advanced Materials (SAM) for more information.