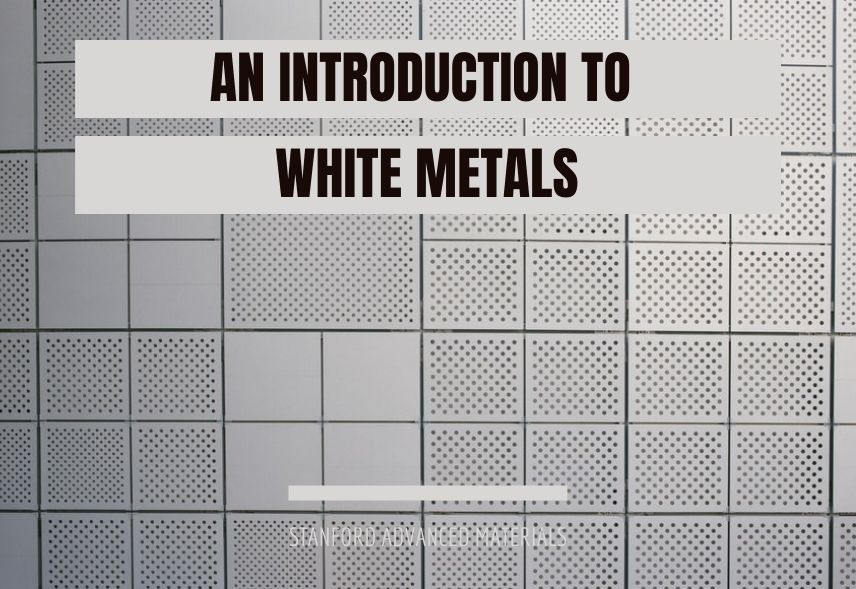 White meals are an important category of metals used in various industrial applications, just as alloys are. An old use of white metals is their referencing in the antique trade for describing items suspected of containing silver but not hallmarked. As an example, the term “white metal” is used in the British fine art trade auction catalogs to refer to foreign silver items not carrying British Assay Office marks, but are however known to be silver and priced accordingly. This post will briefly introduce what white metals are, their general properties, and their applications in daily life.

What are White Metals?

In its most basic form, white metal is an alloy of Lead and Lithium, or other metals like cadmium, bismuth, and zinc. The term “white metals” are generally used to describe a series of metal alloys with decorative bright and are mostly used as a base for plated silverware, ornaments, or novelties. They also include several lead-based or tin-based alloys used for a variety of items, such as bearings, jewelry, miniature figures, fusible plugs, some medals, and metal types.

For instance, it should be castable, polishable, have good flow characteristics, and must be cast at any temperature between 230 and 300 °C (446 and 572 °F), amongst other properties. The forms in which white metals are produced include Pig, Ingot, Bar, Cake, Shot, Granular, and Mossy.

In general, the white metal group is known for its high densities, low melting points (hardly over 4,000 e°C), and the minimal solid solubility of the constituent alloys. Based on experimentations in the past, specific properties of this special group of metal alloys have been discovered, which also explains their importance in many applications today.

Here are more properties of white metals based on different combinations of the constituent metals in the allotted:

The extreme softness of pure lead prohibits its use in the pure state, but it can be hardened by adding comparatively small quantities of other metals such as tin. The “hardener” generally helps to stiffen the whole alloy structure. Pure tin is distinguished by its white color, and it is when exposed to the air. But this characteristic, according to studies, is not inhibited by additions of 10-15% of lead, and the resulting alloys are much harder and cheaper.

The addition of lead to tin also helps to increase its fluidity and castability in a molten state and its malleability and ductility in solid form. Many of the alloys of lead and tin (especially those with 40% tin) have an especially lustrous appearance. This is often explored commercially in jewelry manufacture and for making mirrors in reflectors.

This alloy is often used on account of its plasticity, increased hardness and resistance to chemical corrosion as compared to lead, and the ease with which it can be cast or rolled into shape. It was found that alloys that contain more than 10% antimony could not be satisfactorily led.

Arsenic, incidentally, has the same general effect on the properties of lead. Lead-antimony alloys must be rapidly cooled, lest the primary antimony crystals become forced upwards in the heavier, lead-rich melt and form an antimony-rich upper layer (called bright crust).

Lead and bismuth, when mixed, yield alloys that are malleable and ductile as long as the proportion of bismuth does not exceed that of lead. Malleability and ductility decrease as the bismuth content increases. Although the bismuth-lead alloys show significant contraction (maximum at 50-50), the metal bismuth causes the opposite effect — expansion, when mixed into lead-tin alloys (a quality which is made use of commercially as casting alloys).

The binary alloys of tin and bismuth are generally relatively weak and brittle, which is why they’re seldom, if ever, used industrially. Since the alloys are low melters and can be made up easily, they are often used in the lab for constant-temperature baths. Actually, the eutectic between tin and bismuth occurs at the same bismuth-content as that for lead-bismuth (58%). The tin-bismuth eutectic melts at 1350 C.

There are other alloy variations, such as cadmium and tin and cadmium and bismuth. And each has its own unique set of properties.

The attention on white metals has grown over the past few years, following more research and interesting alloy discoveries. Today, white metals are extensively used to produce several import materials, such as jewelry and many other industrially important alloys.

Thank you for reading our article and we hope that it can help you better understand white metals. If you want to know more about metal materials, we would like to advise you to visit Stanford Advanced Materials (SAM) for more information.